What is the future from Missouri voters? Nixon says small government.

ARNOLD, Mo. – While taping the latest edition of the Show Me Missourah broadcast discussing the history and people of Jefferson County, former Gov. Jay Nixon also shared his views on Tuesday’s referendum on right-to-work.

“People in Jefferson County have not changed philosophically,” said Nixon. “They’re in the center, center-right, especially with fiscal issues, independence issues, personal privacy issues and things of that nature.”

The opposition on right-to-work succeeded by a very large margin in the state of Missouri on Tuesday. It is an issue that has brought a lot of controversy and differing opinions from those voting and their legislature.

“I think yesterday’s vote here in Missouri is the perfect example, with 67% statewide voting in favor of the working men and women of this state. [It’s] the kind of coalition that you need to move the country forward,” Nixon said, also saying Tuesday night’s numbers were very telling of Jefferson County with 80% of voters voting no on Proposition A.

“That’s the coalition. That’s people that get up every day, they work, they go to church, they take care of their families, they don’t want government telling them what to do. They’re willing to do their fair share. That’s what I think the future of the country, politically, is going to be.” 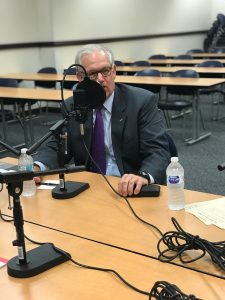 Nixon said that his opinion is that when the Democratic Party is viewed as a state of entitlement as opposed to a party of work then it runs into real trouble in Jefferson County. He also noted there are over 200,000 people in the county which has made for a party identification shift over the years. Although Jefferson County has been viewed as leaning more towards Democratic, there has been an identification shift that many have tried to push against.

Show Me Missourah host Scott Faughn mentioned that things have happened in state government that veered from Nixon’s administration and what he remembered it being. He also said that it was notable that Nixon has been quiet about many issues, but has been speaking out about right-to-work.

“I feel very strongly about that,” Nixon said. “When it gets to issues, I’m still going to be very, very strong.”

“Right-to-work is something important. I carried a laborers card for seven years. If it wouldn’t have been for those wages, I would have been in debt after college,” Nixon said. “And you see all of the efforts of training and safety and all of the things that organized labor do. You compare that to counties and areas of the state where all they’re doing is minimum wage work and you see the quality of it.”

He recalled the tornado that hit Joplin in 2011, saying “we fought like heck to make sure we kept the prevailing wage down there.”

Nixon ended his thoughts on right-to-work by saying, “I just feel that the crafts are ready to compete and I feel very strongly about the need. There’s no time in the history of this country where more money has been in fewer people’s hands and taken power away from the working man. During that time period is dangerous short-running and long-running.”